When Bentley took its first steps into the electrified vehicle market in 2019, with the launch of the Bentayga hybrid SUV, it was a bit late for the non-combustion engine part. But having introduced himself, he signaled loud and clear his intention to stay. “By 2030, the whole portfolio will be electric – no more combustion cars,” insists Peter Bosch, board member for manufacturing. The 2021 figures show unprecedented demand for Bentley’s hybrid electric offering, a trend that has been seen across the EV market as a whole, with more battery electric vehicles on UK roads l last year than in the previous five combined. According to Society of Automobile Manufacturers and Traders, 18.5% of all new cars registered in 2021 are either plug-in hybrids or fully electric; Meanwhile, Ford, VW (which also owns Bentley), Mercedes Benz and Toyota have all committed their future to electric.

This month sees the next big step in Bentley’s journey to full electrification in the form of the Flying Spur Hybrid sedan, which I put to the test when it launched in Los Angeles. Driving through Beverly Hills is an eerie experience: in a city fueled by bravado, glitz and glamour, silence is an unconventional currency. As the tanned locals of Beverly Hills blast Rodeo Drive in Lamborghinis and Ferraris, designed to command attention, the new Spur whispers and floats. With no vibrations or engine noises in the cabin, the electrified Spur is a calming place to sit, whether you’re driving or lying in the back. Only the noise of the fan or the gentle wheezing of the massaging seats breaks the silence at low speeds.

Once on the back roads towards Santa Barbara, the Spur’s electric motor (134 hp and an expected 25-mile electric range) is aided by the three-liter twin-turbocharged V6 gasoline engine, which combines to produce 536 hp and give the spur an expected range of up to 450 miles. Running the car in EV mode requires featherweight footwork – nothing more and the V6 kicks in and takes over the acceleration duties, helping it reach its top speed of 177mph. Under hard acceleration, the silence is quickly broken by the sound of the V6 revving hard to propel the 2.5-tonne car to pace. For those familiar with W12 and V8-powered Spurs, the V6 feels taut compared to the powerful thrust delivered by larger combustion engines, but it’s far from sluggish. Reaching 60 mph from a standstill takes 4.1 seconds, a fraction slower than its W12 and V8 counterparts.

To onlookers, only the hybrid badge behind the front wheels and the twin filler cap reveal the car’s alternative drivetrain. Inside, the Spur’s interior remains unchanged with its new rotating instrument binnacle, open-pore wood, quilted leather and ever-present comfortable seats, depending on what you choose from the sizable options list. . Prices should start at around £180,000, but can increase quickly with a few added extras.

Bentley says its first full EV is due in 2025; meanwhile, this pairing of electric power and automotive opulence serves as a tantalizing taste of what’s to come. 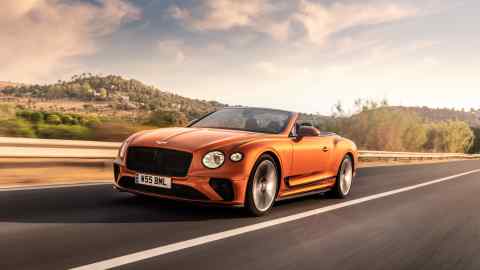